In this Q+A, I interview my dear friend Neda, who was 40 when she conceived her baby girl, and 41 when baby girl was delivered. Neda was blessed to deliver baby girl in what was her dream scenario: an unmedicated, vaginal birth. Here we speak about what worries and concerns she carried throughout her pregnancy and her advice for older mothers. Let’s get into it!

1. What was your biggest fear when you were planning to have a baby as an older mother?

2. Did that fear come to pass?

It didn’t! I trusted my body, I trusted myself for being able to give the best home for my baby and that was my priority. I knew I lived a clean life. I didn’t feel I was too old for this. (Note: Neda had bleeding in the uterus at 10 weeks that required her to take bed rest. But thankfully, that did not have a negative effect on the pregnancy!)

3. What was the biggest misconception you found going through this pregnancy journey as an older mother?

I was very bitter toward my obstetrician (OB) because she kept on bringing up my Advanced Maternal Age. Toward the end of my pregnancy, she was the one who said I needed to be induced. She was really throwing scare tactics at me. It was really awful and sad that my own OB would do this, someone I trusted with my care and my baby’s care.

4. What other issues did you have with your OB?

She had all these labels on me. I had gestational diabetes. I was Advanced Maternal Age. Up until 30 weeks, she had convinced me there was going to be a C-section. I felt she wasn’t advocating for what I wanted but for what was textbook and convenient for her. She kept treating me like I had an illness because I was a certain age.

5. What was your plan for delivery?

Initially, I didn’t plan for an unmedicated and natural delivery. But as I started to do more and more research, I realized I wanted to deliver unmedicated for the benefits it would provide my baby. I did a gentle birth hypnotherapy class and I realized – I can do this! The original plan was for a C-section at 39 weeks, but by the grace of God, I went into labor on my own.

My doctor kept on trying to push induction on me, which I didn’t want to do because I felt it would impede the natural birth process. The night before the planned induction, I drank a bunch of red raspberry leaf tea, ate a lot of spicy food and pineapple, and went on a long walk. I went to sleep and at around 4:30 am I woke up because I felt something in my lower back. I started timing my contractions and they were quite consistent. The very early part of labor is very Zen, I did meditation, breathing, bouncing on a yoga ball. I thought “this is great!” I had a power breakfast: an omelet and I made homemade donuts in our air fryer. My mom and my husband were just hanging out with me because in the early part of labor there doesn’t seem to be much going on. We drove to the hospital and my husband advocated for me to have a female provider to check how dilated I was. It was several hours then, around 2 p.m., and I was starving so I ordered one of those delicious Mendocino Farms sandwiches, even though they tell you not to eat. (Note: Many medical providers are loosening their grip on the “no food” rule, especially in early labor as a mother requires fuel to last through the arduous task of labor and giving birth.)

7. After getting through early labor, how was it feeling?

I went through the easy peasy part of labor and then the contractions started getting stronger. She was sunny side up, so I started doing these exercises to help her turn. As the pain started to intensify, I used these two tennis balls and a sock to massage my lower back for relief, which helped so much.

They initially checked my dilation and I was about 3 centimeters and several hours had passed and my dilation hadn’t really increased. My OB wanted to break my water, but I said no to that. She then pressured me to take Pitocin (an oxytocin injection that causes stronger contractions) and me and my husband decided on the lowest dose.

8. What happened after you took Pitocin?

After that, things started to progress pretty fast. I got a new OB and she would come in and measure. She gave me some time to see where things were going. I kept on wondering if I should get an epidural, but I reached a point of no return. I kept feeling this urge to bear down, and I had a bowel movement in the toilet. I heard the nurse call out “don’t bear down!” but I couldn’t stop. Then the OB came and saw that I was nine centimeters and she said I could push. That felt so victorious! I felt God’s grace helping me along. I knew, at this point, God is going to get me through this and I’m going to get this beautiful baby out. I visualized all of my female ancestors before me, their power and their wisdom to help me along.

9. What was the process of pushing like for you?

The actual pushing was really hard and it lasted for about an hour. After each contraction, my husband would give me an ice chip and I would focus on sucking on that until my next contraction. And for whatever reason, making the “shhhh” sound during each of those insane contractions helped immensely!

My husband was my champ and was an amazing coach. I would just look into his eyes and he would hold my hand. Especially as it got toward the end, I needed that focus and so I locked in on him. He was my rock, he was just there with me. At times I was pushing and pushing and it felt like not much was happening. He kept saying “give us a good push!” You really feel like you can’t, you feel like you are giving it your all but nothing is happening.

The funny thing is I don’t quite remember that “ring of fire” that everyone talks about when your vagina tears for the baby.

When she finally came out, I was in disbelief. I couldn’t believe it until she was in my arms. When she came, I was just looking at her, and I spoke to her in Farsi (Neda’s native language). I was telling her how much I loved her and how happy I was that she was there. I thanked her for coming. It was a prayer for her.

11. So it sounds like the OB who wasn’t advocating for you wasn’t there when the baby arrived, and the OB who was there was an amazing advocate and you had your dream birth. How did that happen?

By the grace of God, everything happened for me the way I prayed for it to happen. My old OB wasn’t on call, she was just there to check on me. And the OB who delivered my baby was so wise and strong and a fellow woman of color, which also put me at ease. I also had an amazing labor nurse who knew just what to say after the first one wasn’t so great. I felt I had this really great team and my husband. I don’t know how I would have done it without him. The whole time he trusted me to do what I wanted and to make the right decisions.

12. It’s amazing to me that you had an unmedicated natural childbirth despite facing so much resistance from your OB. I don’t know if I would have had the strength that you had to do what you did. Where did it come from?

Since the beginning of human existence, we’ve been giving birth in very natural ways. It’s only become a medicated thing in the last few decades. I very much wanted my body to run the show and I would just show up for it. I knew if I was medicated, the drugs would be running the show. My mother had natural childbirths with all three of us and her mother and all of those before. That’s just how it goes. And I wanted it for me. I respect everyone’s choice and what they want to do. No judgment if you want a C-section or an epidural. But natural birth was something I wanted very innately. Our bodies as women are quite amazing and capable of so much.

13. Was there any other reason?

In life, I sometimes sell myself short and this time I didn’t want to do that. From the very beginning to the very end, going into labor on my own, etc. I called in all of the prayers and my prayers were indeed answered. This bundle in my arms is the very best baby I could have ever received.

14. What advice would you give to women out there who are older and still yearning to have a baby?

Trust your own body, trust your wisdom. Know that there is both internal and external support for you. There is no need for naysayers. Of course there are people who have physiological challenges and my heart really goes out to them. But there is a lot you can do to get yourself in good shape. Up your Vitamin D levels, get your thyroid checked, eat a nutritious diet, meditate, have positive visualizations. There are a lot of great things we can do for our bodies. This is whether you’re in your 20s, 30s, 40s.

The postpartum journey is a whole thing. I placed so much stress and worth and energy in the childbirth process. If I could do it all over again, I would have more focus on postpartum care and the fourth trimester. But there’s really no way to truly prepare for that journey, other than having all your supports lined up: family, friends, postpartum doula, night nurse, whatever you need! 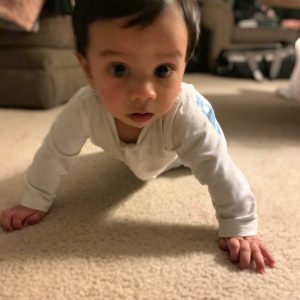